Trade Wars: Trade Wars suddenly dissapeared this month, it's expected to start again in February after the deadly swarm raid. Not sure yet which of the two versions it will be.
The Trade Wars event is once every 2 weeks, starting right after a raid ends.

City Raids:
The new raids take 160K points to complete, which means the new "fair share" of 1/25th of the points = 6.4K per player.
For players still below that: be aware that I will slowly start increasing the minimum towards it. details here in the 2nd post.


Other:
-Raid Cycle Challenge #4: 3 Januari - 15 March.
At the end of the raid cycle (11 raids), I'll do an extra prize draw again.
Prize list will include at least one mythical city raid or similar level item again & lots of other nice items =)
Odds will be based on your raid score average of the 11 raids: raffle (lottery) style, every 1000 points = 1 ticket.
You can find your current average and scores on the event spreadsheet

I've been slacking a bit with updating the weekly events & draws recently, but there have been plenty of things actually going on in the game (and announced in city chat/discord). Just a quick overview of the last few weekly raid draws here:

And the raffle results are in! All items sorted by TH value as usual and Endless 5 completed, so 5 rods have been added to the prize pool =) 144 total tickets collected & the RNG selected the following winners, listed on the right: 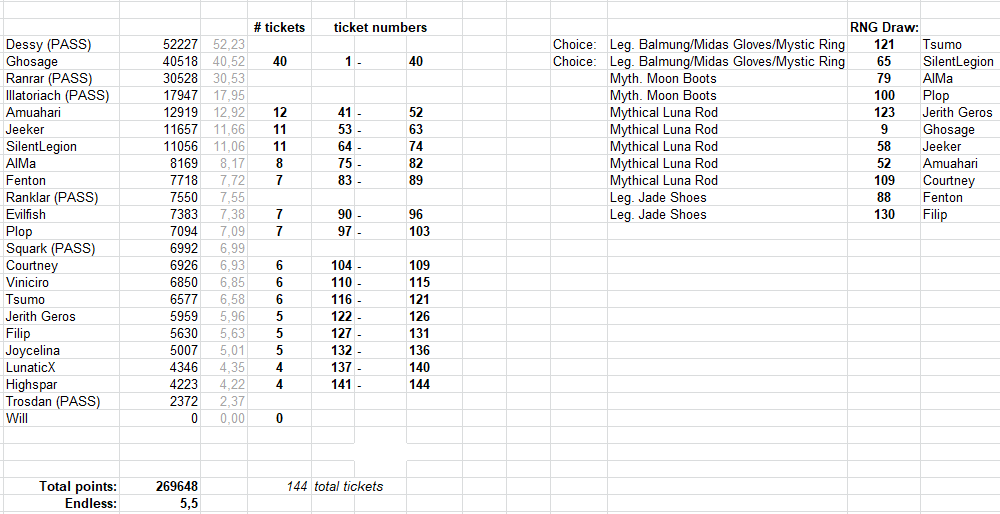