City Raids: 4 raids in July. With a bigger raffle event planned for the Rampaging Orcs raid.
Trade Wars: The next one will start 5 August.
(They're still working on changes to the event, details here)


Other:
-Raid Cycle Challenge: 7 June - 18 August. At the end of the raid cycle (11 raids), I'll do an extra prize draw.
Odds to win will be based on your raid score average of the 11 raids: raffle (lottery) style, every 1000 points = 1 ticket.
You can find your current average and scores on the event spreadsheet
Details to be announced later, prize(s) will be something nice =) Most likely a mythical city raid or similar lvl item as main prize & quite a few other nice items

The new raid with extra levels is expected for this weekend. I will be using the "old standard raid" fair share for the random helmet draws this week, as there is no info yet how many points per player are needed to finish the new raid.
I hope everyone will be aiming to cover 1/25th of the points needed to unlock the rewards they can claim as usual. I'd expect the new rewards to be valuable enough to easily cover the costs of a few extra speedboosts uses of the castle =)

-Bonus Prize Draws for the first new raid:
-1x legendary lvl 49 dragonfire potion, as random draw between those that cover the "new" fair share (1/25th of whatever amount of points it takes, to unlock the rewards we reached with our city)

And even more extra draws thanks to Viniciro!
-2 mythical lvl 30 relic hammers, as random draw between everyone that scores 5K+ points

Small update with new raid info.. last stages (as I forgot to write down the points needed for the first stages):

Endless 9 completed this weekend. and all scores entered into Pixie's Raid Challenge as usual: 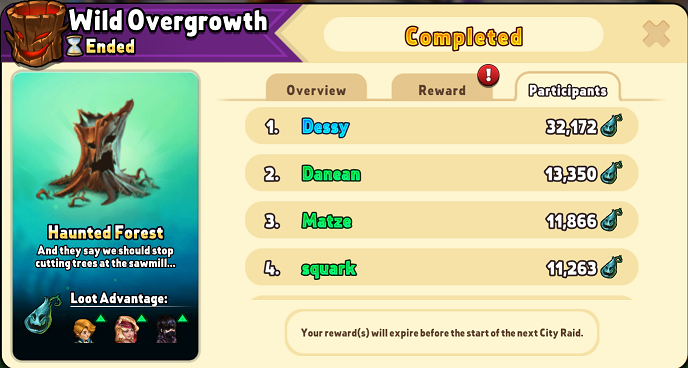 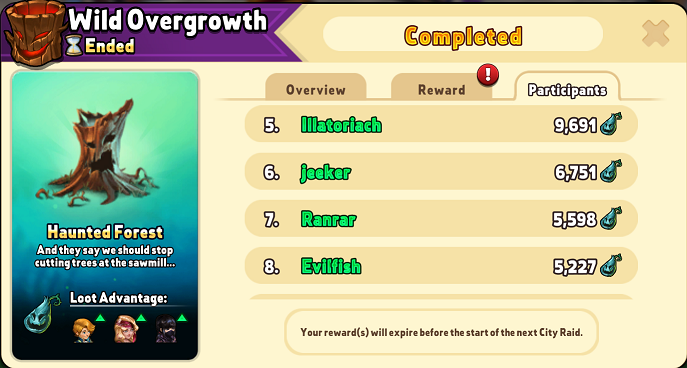 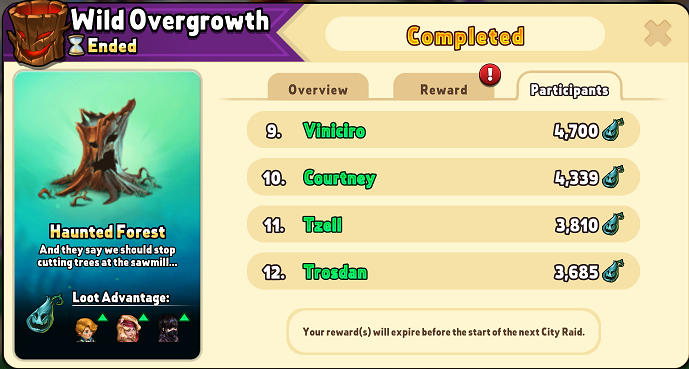 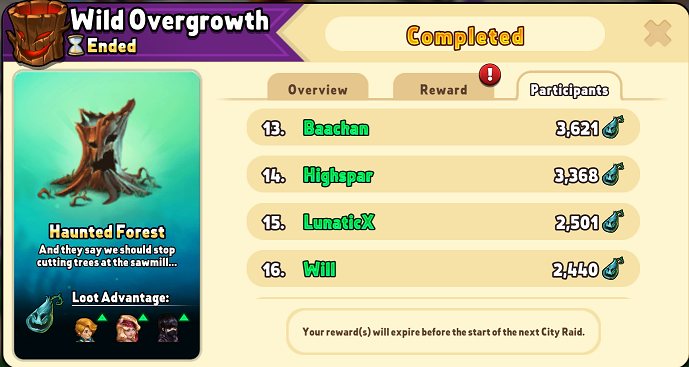 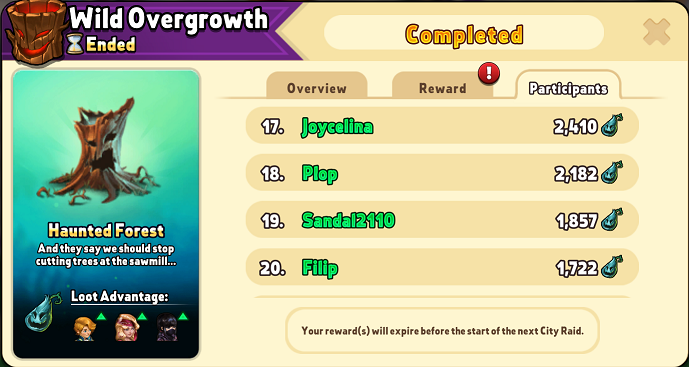 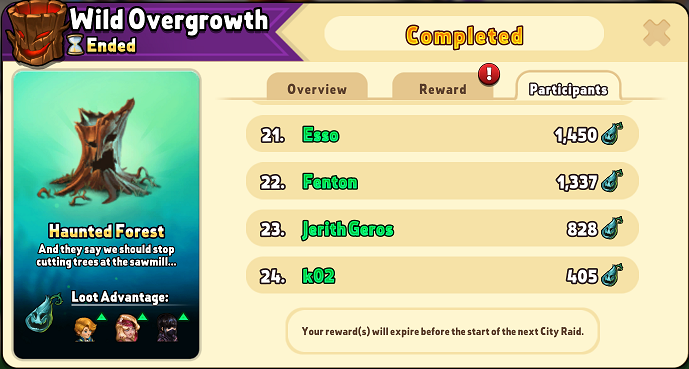 Nice raiding all, endless 11 completed, so 5 mythical lunarods added to the pool.
The winners have been updated in the first post. Raffle calculations & draws: 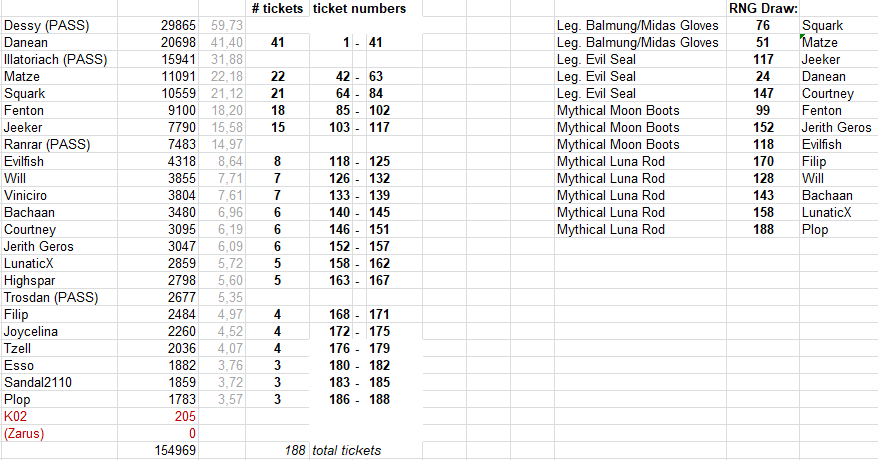 And all city scores have been entered into Pixie's Raid Challenge as usual: 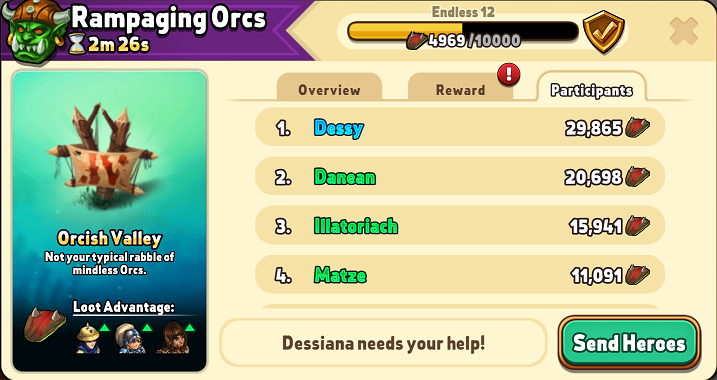 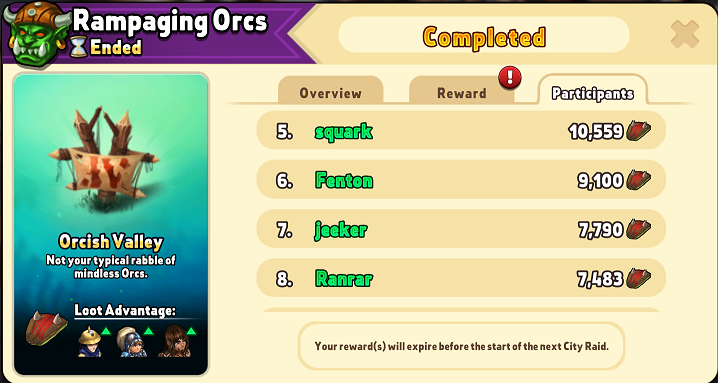 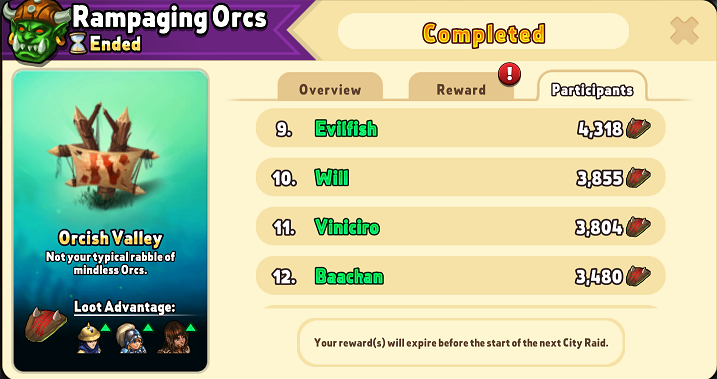 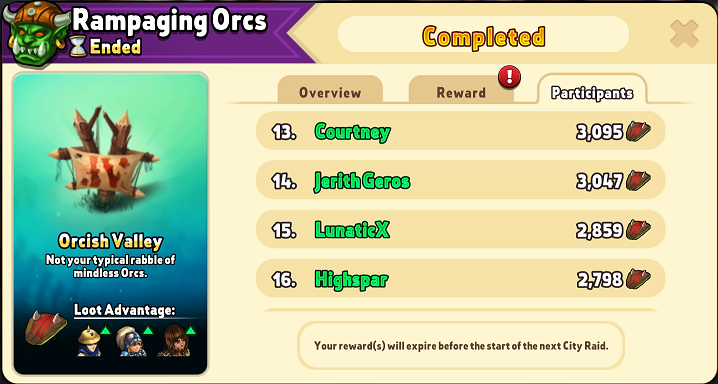 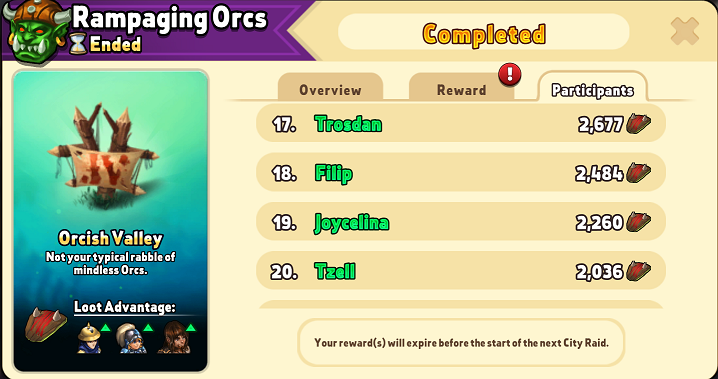 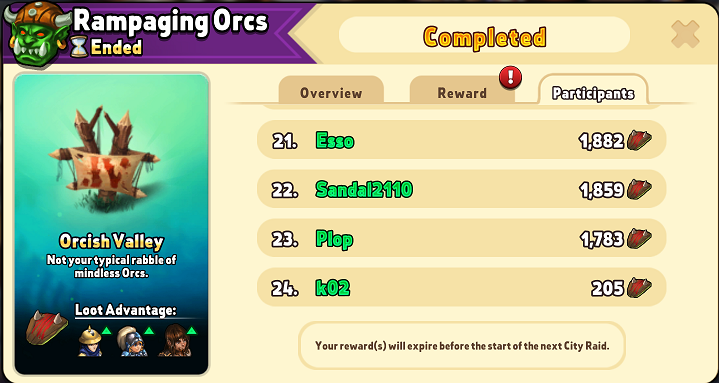 So many new personal record broken, thank you all so much for putting in so much effort!
Almost 350K total points scored, in the old raid system, that would convert to endless lvl 30 completion!!! 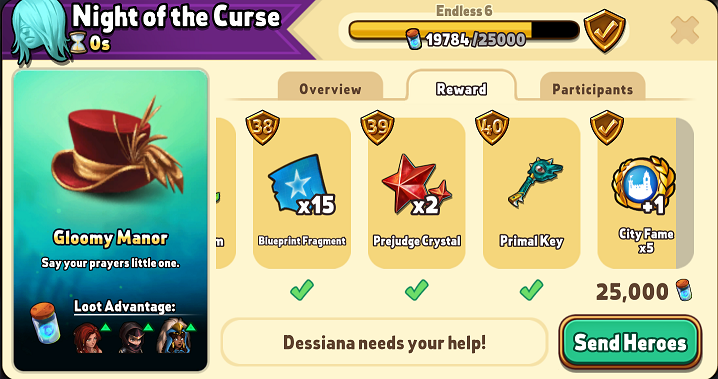 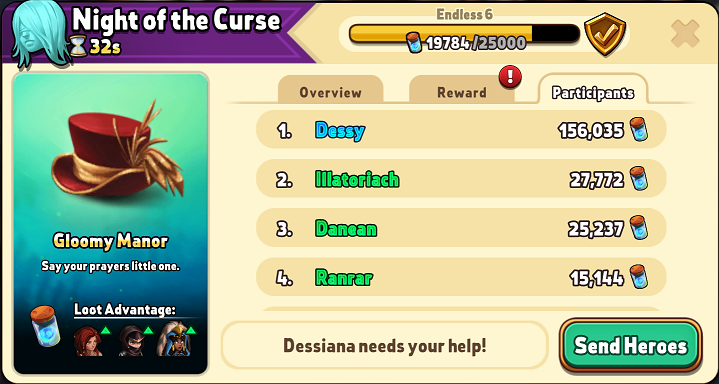 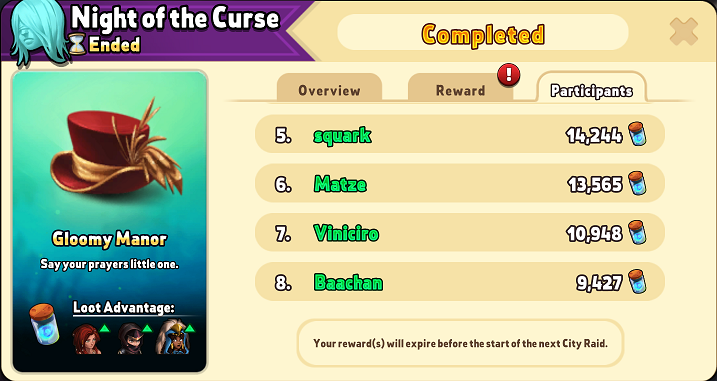 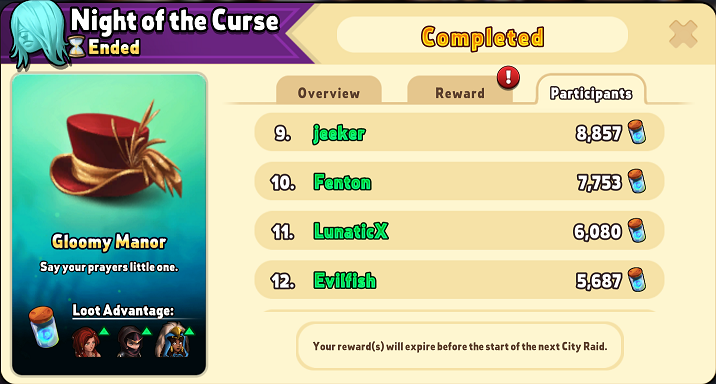 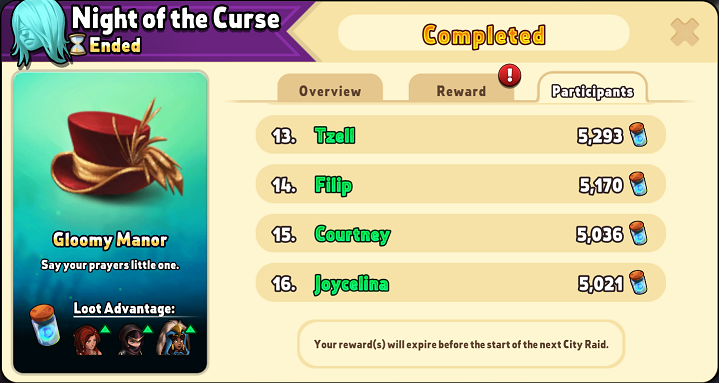 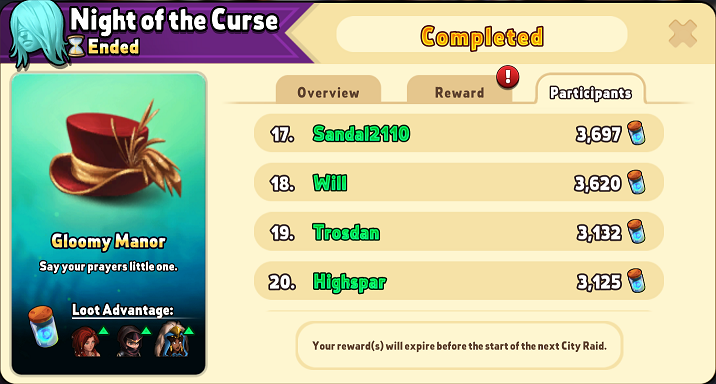 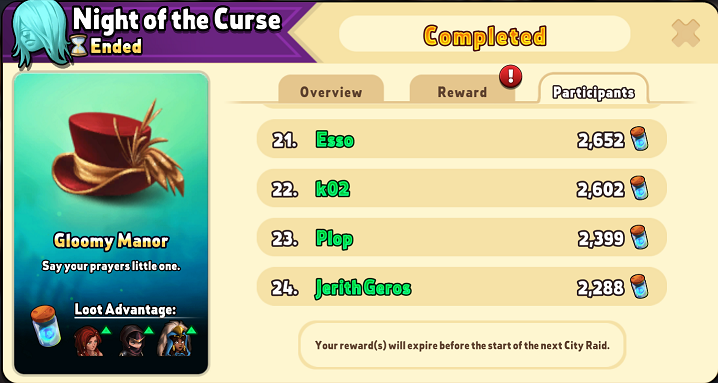