Trade Wars is back, with a new and "improved" version.
Just listing the changes here, that we discovered so far.

City Rewards: instead of chests we now get keys, but the amount of gems & charms per tier was reduced:
And 25 blueprint fragments have been added at #26. 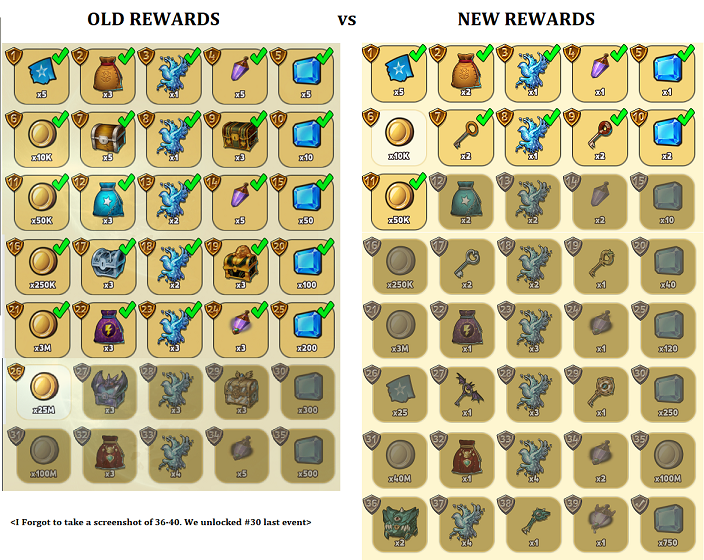 Blueprint: replaced by a primal key for players that have it, so it’s at spot #38. Making it seem almost impossible to reach.
(We unlocked reward #30 on the last event, when we ranked 24 on the leaderboard. But with the changes in scoring points, I doubt if even the #1 city will reach it. Unless they reduced the amount of points needed for the higher tiers… too early to know for sure… but up to tier 15, the amounts are unchanged)

Changes to scoring points:
-Event time: Instead of 4 days to contribute, we now only have 3 days.

Dominion (PvP):
-Opponents are no longer based on arena ranking. The new seperate dominion rank is resulting in lots of complaints so far about heavy losses, due to matches against players way above them in level/equipment.
(We have not figured out yet what determines the opponents you get).
-Cost to buy extra rounds of fights severely increased: First step is now 200gems. (used to be 1-10-50...)
Severe loss of contribution points in this area as a result.

Contribute:
-Base value of chests lowered by -40%, Base value of items changed, not sure exactely how.. some I checked increased by +74%, others decreased with -10%, item level seems to play a more important factor now.
-Turning in full sets provides +20% bonus points. According to the official info, this bonus can increase up to +200% for players that buy and turn in many extra sets on the same day.
-Cost to buy an extra set with gems is no longer fixed at 100gems per set, but starts at 1gem & increases, resets daily!!!

…. If anyone has any more new info, please share =)

just sharing info on changes for the 18 august trade wars:

Extra contribution sets still start at 1 gem & increase, but no longer go beyond 100gems cost for the higher stages.

New item contribution points value:
Turns out to be based on item level, with a multiplier for higher qualities. A lvl 40+ item of great quality or common lvl 46 item now gives more points than a dwarvish chest. (Thanks to Arty for sharing the info & exact values on the official forums in this post)

!!!News!!!: ...and we finally figured out what determines the PvP opponents you get.
They're based on your average arena hero power. Removing all your arena gear results in instant easier opponents & a lot more wins as most low gearscore players have no idea how to build decent skill based PvP teams.
(When you're running a break team, keep the 100% breakchance item per hero equipped of course).
Unfortunately, we haven't been able to take much advantage of that, as we didn't figure it out untill day 3, after most players already did all their dominion fights. But it should provide us with a huge scoreboost and extra rewards to match on the next one =)

Other news:
-CC recently posted on facebook that they're planning to make more changes to trade wars, that will allow a lot more cities to finish the whole event for all rewards.
-The Trade Wars event will be once every two weeks now


As for players requesting a similar "fair share" minimum points as we have for raids:
I'd love to & plan on it, but the problem is that with the event changing every single event.... it's impossible to set a fixed number of points because points that can be scored & rewards obtainable constantly keep changing.
Had I used 30K+ fixed points as minimum for example as requested on event #3, enforcing that would have ment I would have had to kick 23(!) players out on event #4 due to event changes in scoring points and rewards claimable.
And if based on the current event I would set it at 20K+, if changes make the higher rewards available for us, or maybe even final rewards become available for the city because 80K+ points each suddenly becomes easy....  the 20K wouldn't make sense as fair share or minimum anymore.

So I hope everyone will have some patience untill they stabilize the event. Because otherwise I'm just calculating new numbers every event and the following event they simply won't make any sense, nor would they be enforcable for that reason.
I'm posting overviews of fair share % contributions compared to the Top 10, Top 50 & Top 100 cities instead as a result. Still just using the 1/25th of top 100 as absolute minimum for now, as it scales up and down with the event changes... not exactly a fair share as it's way below the city average and 1/25th of rewards claimable… so not expecting players to hug it, as always aim for covering 1/25th of whatever rewards we can get if possible =)