Trade Wars: The Trade Wars event is once every 2 weeks now, starting right after a raid ends.

City Raids: 4 city raids in October.
The new raids take 160K points to complete, which means the new "fair share" of 1/25th of the points = 6.4K per player.
For players still below that: be aware that I will slowly start increasing the minimum towards it. details here in the 2nd post.


Other:
-Raid Cycle Challenge: 23 August - 3 November. At the end of the raid cycle (11 raids), I'll do an extra prize draw again.
Prize list will include at least one mythical city raid or similar level item again & lots of other nice items =)
Odds will be based on your raid score average of the 11 raids: raffle (lottery) style, every 1000 points = 1 ticket.
You can find your current average and scores on the event spreadsheet

Not the best raid due to a bug preventing many players from playing friday/saturday. Raffle calculations & draws have been done, winners listed on the right:

Thanks for another good raid all, endless 10 completed so 10 lunarods have been added to the prize pool.
130 total tickets collected & the RNG has selected the following winners (on the right): 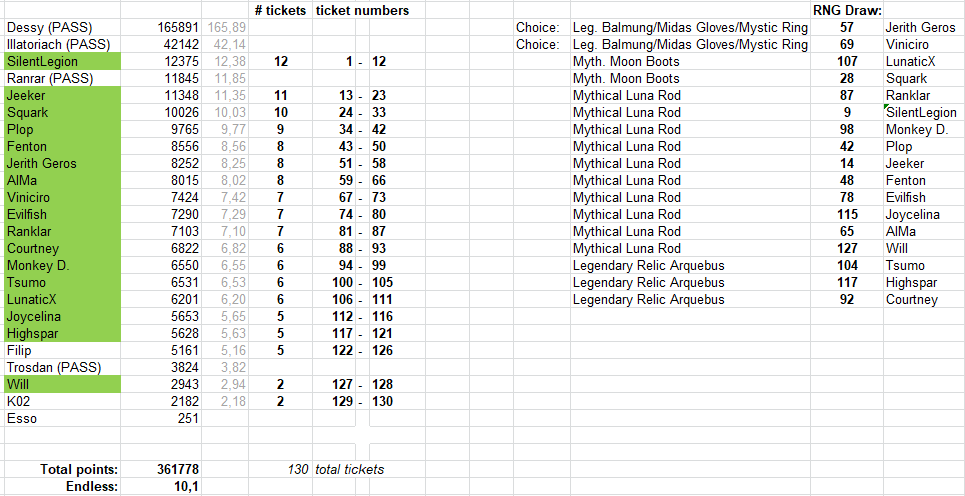