Trade Wars: The next one will start 2 September

City Raids: 5 City Raids in August. Starting with Voice in the Dark & Burning Countryside which are both 3x special hero loot bonus raids. Black Flags Rising after that which is the last raid of the cycle, after which the raid cycle  will start over from the top again.

The new raids take 160K points to complete, which means the new "fair share" of 1/25th of the points = 6.4K per player.
I do hope everyone will be willing to work towards covering that 6.4Kish average we need to finish it, as I do want to make sure the city becomes stable enough to finish the raid every week without relying on a few players going very far beyond it.
I won’t be enforcing any higher minimums yet,  but later I will probably make below 6.4K exceptions, based on how much I can reliably compensate for, even on a busy weekend. Details here, now updated with future raid requirements


Other:
-Raid Cycle Challenge: 7 June - 18 August. At the end of the raid cycle (11 raids), I'll do an extra prize draw.
Odds to win will be based on your raid score average of the 11 raids: raffle (lottery) style, every 1000 points = 1 ticket.
You can find your current average and scores on the event spreadsheet
Details & prizes can now be found at the bottom of this post =)

-The next Raid Cycle Challenge starts with the new cycle: 23 August - 3 November
Prizepool with at least one mythical city raid or similar level item again & lots of other nice items.

and need before greed: If anyone hasn't finished (or maybe even started with) support & energetic skill teams yet. Feel free to city request a legendary quality noble plate/winged sandals, or tiamat/moon boots/moon walkers/falcon eye/colored powder this weekend. (I might be able to fill several per player if it's not many people). After this weekend, also just keep requesting them if you can use them, I'll craft & fill them whenever I can.
Trade Wars: should start right after this raid ends

Bigger raffle with nicer items planned for next week, and after that the final raid of the cycle & Raid Cycle Challenge prize draws =)

Black Flags Rising (Ended):
Final raid of the cycle, Raid Cycle Challenge draws after that! While I have been pretty silent about the prizes, I most definately haven't forgotten about it and I've been very busy crafting & fusing a decent prizepool =) Instead of just a few good items as I had planned, I changed it to 1 prize for every player. So.. on to the details & what you can expect from it...

The Raid Cycle Challenge:
Extra prize draw, based on your raid score average of the last 11 raids: raffle (lottery) style, every 1000 points = 1 ticket

-1 Prize for every player: Everyone will get to choose 1 item from a prize list, with choice going in order of how the tickets have been drawn. So some patience will be required, but everyone will have some choice and hopefully get something they can use this way =)
As always, keep in mind you're free to do with the prize whatever you wish, that includes selling it for gems to buy other things that may be more desirable. Some prizes are worth a lot more gems than others, so choose wisely =)

*drumroll* The tickets have been counted, numbered & the draws have been done… (final results here). you can either love or hate the Random Number Generator for this one


Vermin Infestation (Ended): Top 5 & 3 Random.. and 1 random 6.4K+ draw
-8x Epic lvl 45 Azure Rings: Top 5 & 3 Random
-1x Epic lvl 54 Starfrost Skates: Random draw between those raiding 6400+ points
(Should the starfrost skates be unrequestable due to city trade player level restrictions, I'll provide another item as alternative… or I can of course hold on to them if prefered if someone wants to level up for it. And as always, 1 prize per player. Should the random 6.4K+ draw fall in the top 5, the ring will go to the next highest raider instead)


All results entered into Pixie's Raid Challenge as usual. (Note that the 10K+ crazy raid tier has been increased to 25K+, as over 100 players went above 10K last weekend, so it's no longer considered a crazy amount). 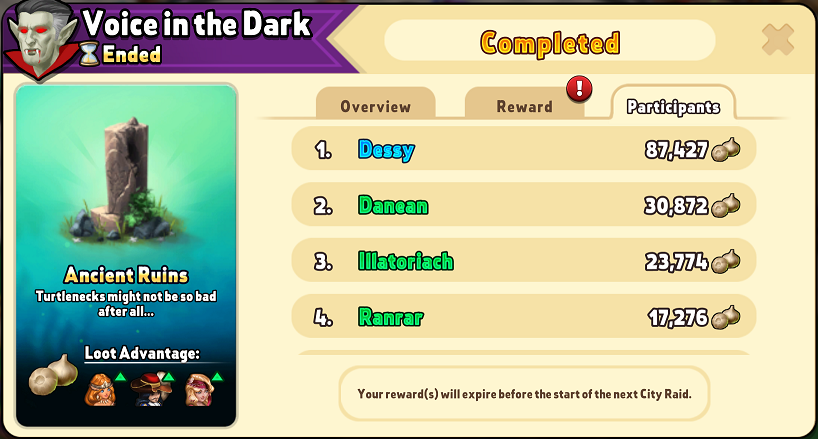 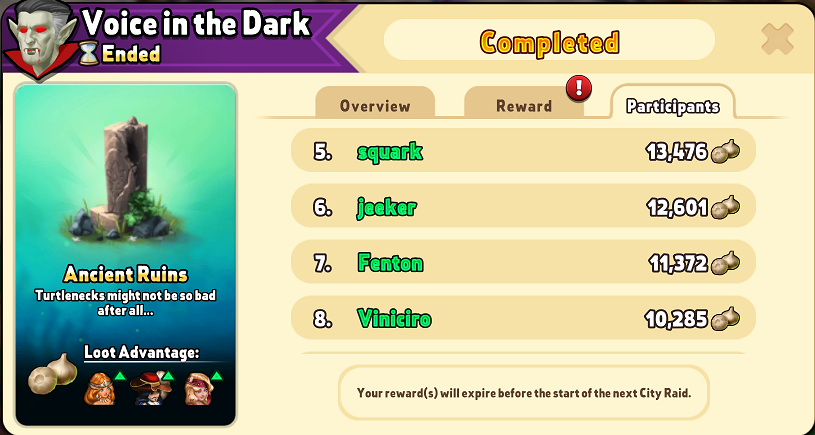 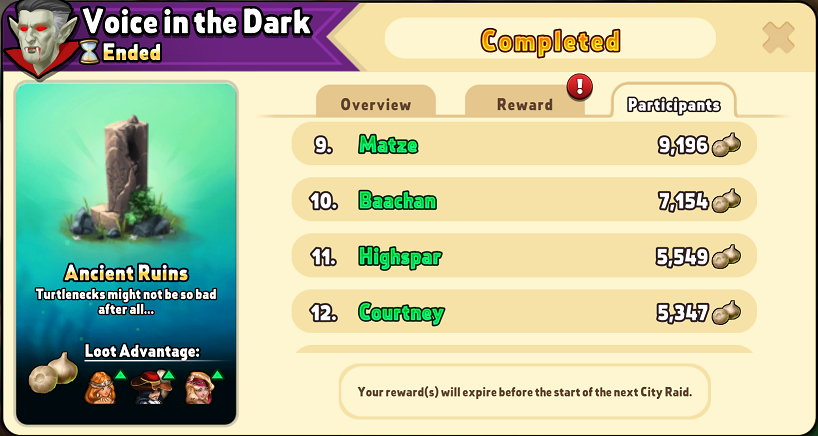 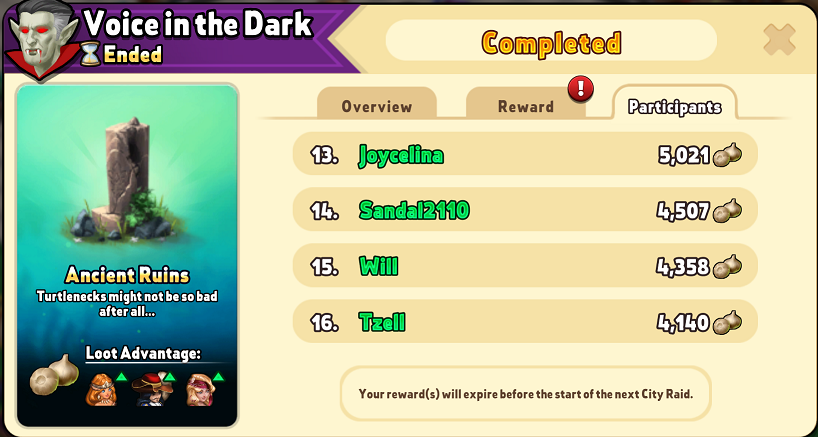 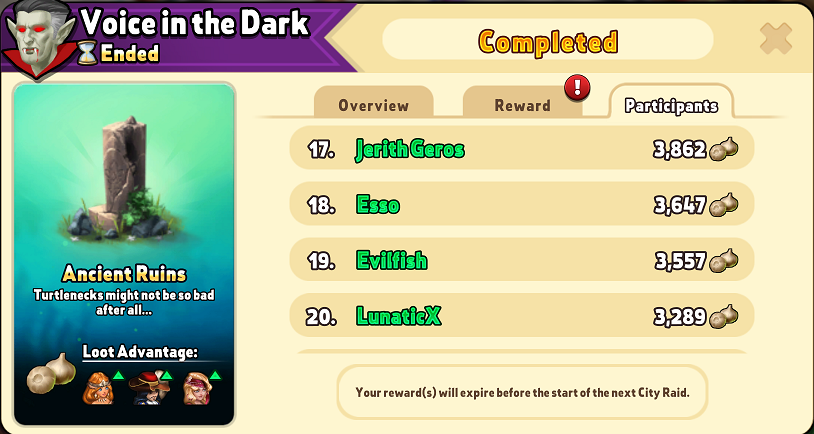 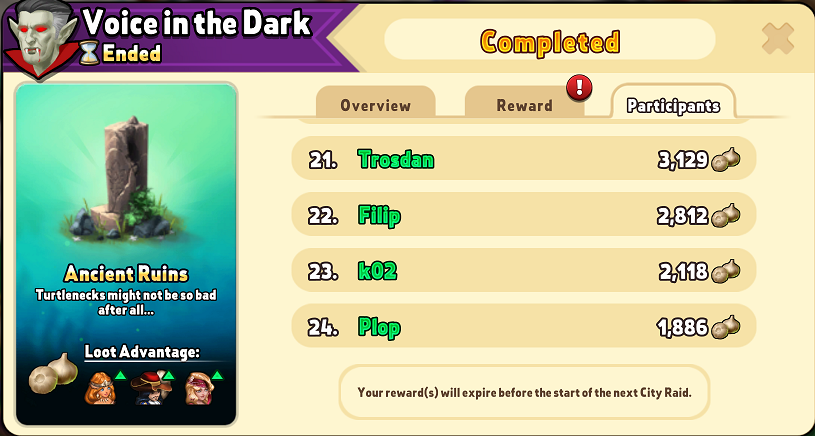 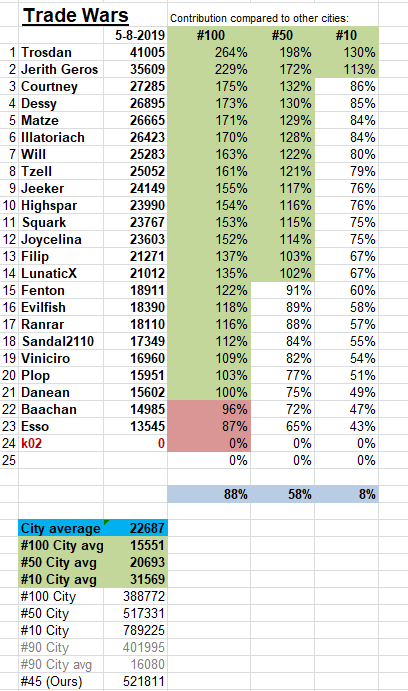 And as for the raid after that:
Endless 3 completed, 8 mythical lunarods added to the prizepool. Raffle calculations & draws: 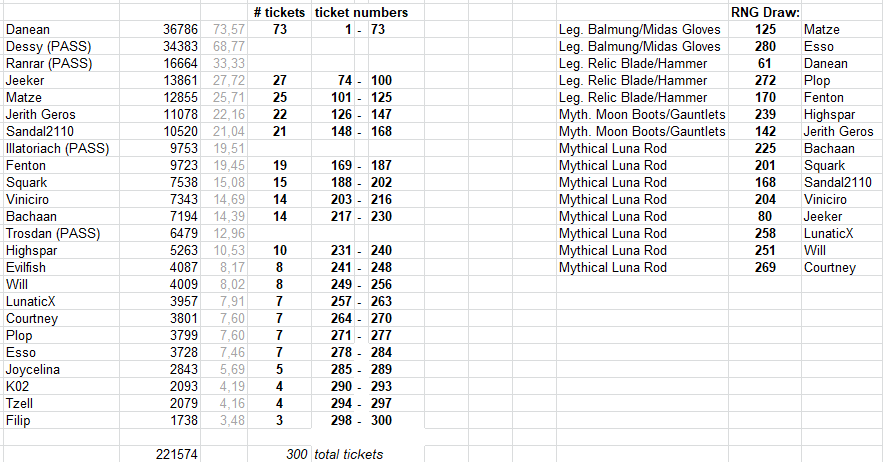 All city raidscores have been entered in Pixie's Raid Challenge as usual: 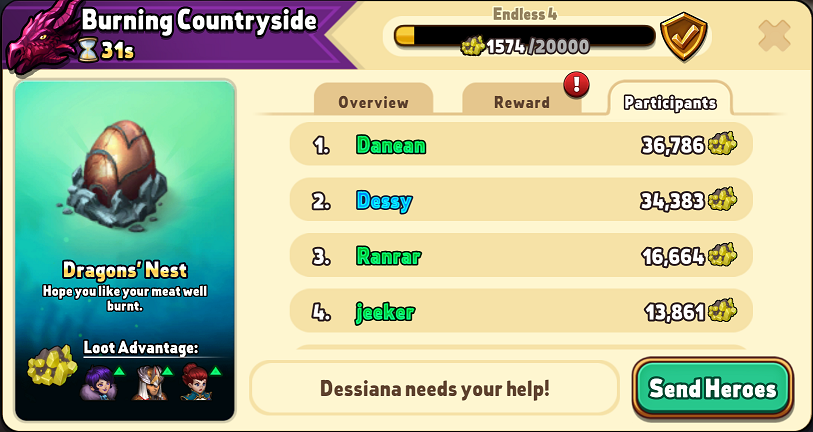 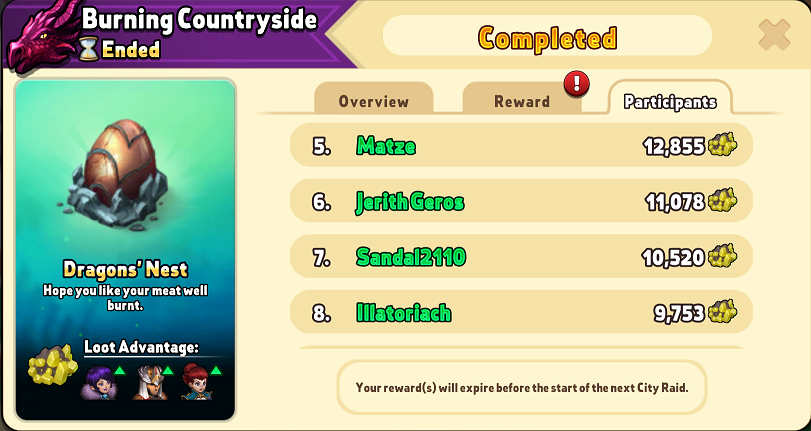 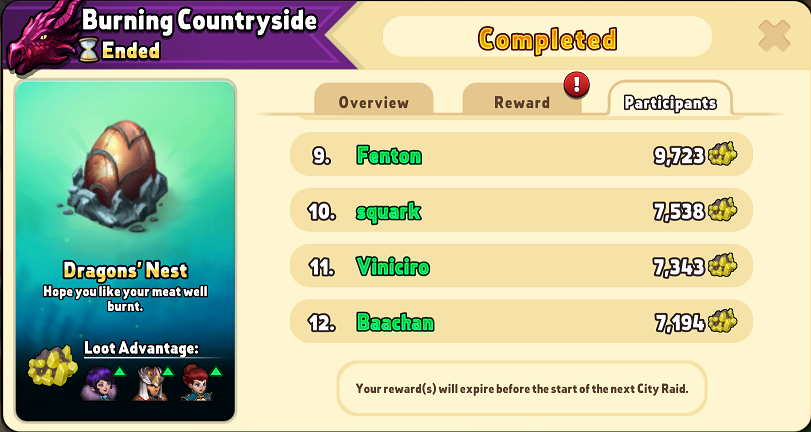 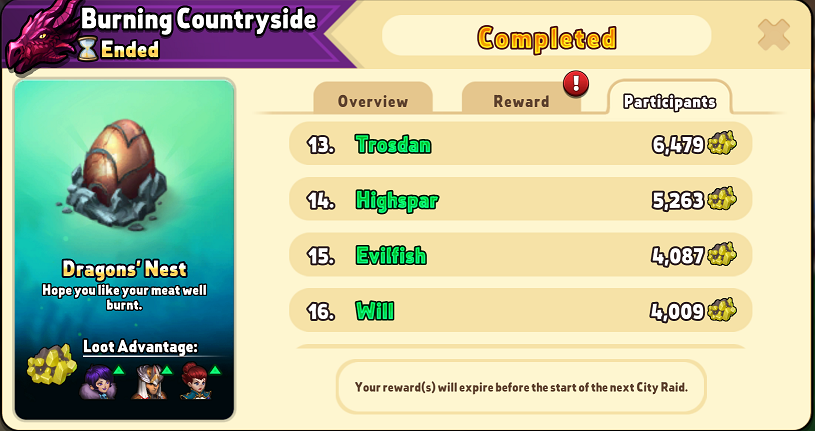 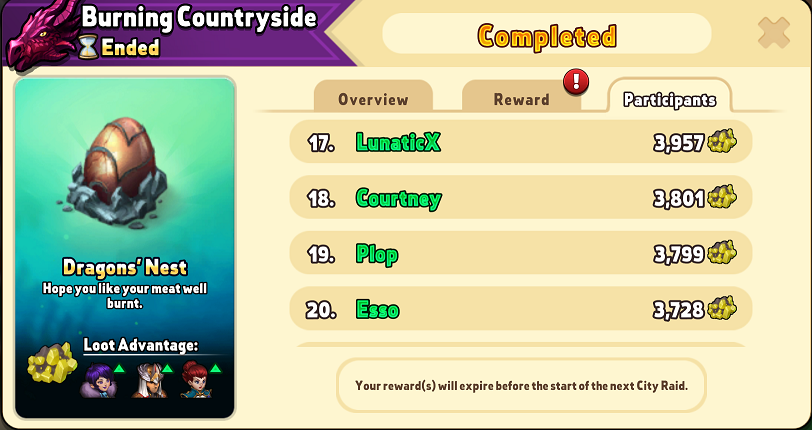 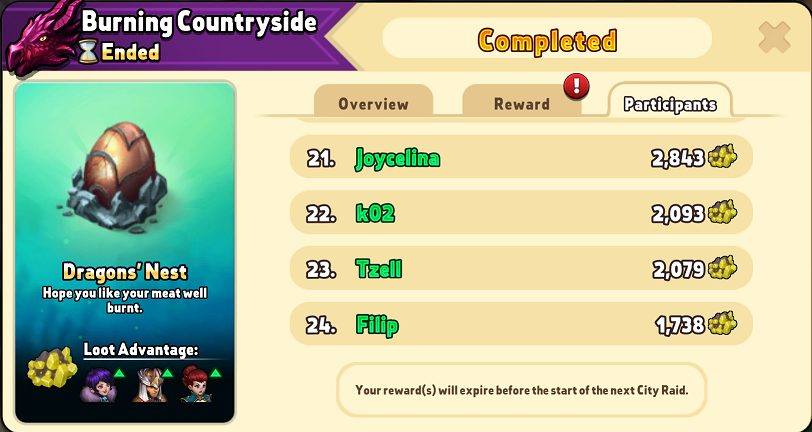 Quick Trade Wars overview.
only rank #60 on this one & rewards #24 unlocked, but most of us actually did really well, thanks for all the effort =)   Hopefully with the next one not being an unanounced surprise (2-4 September), we won't have so many players suddenly missing (the first day(s)). 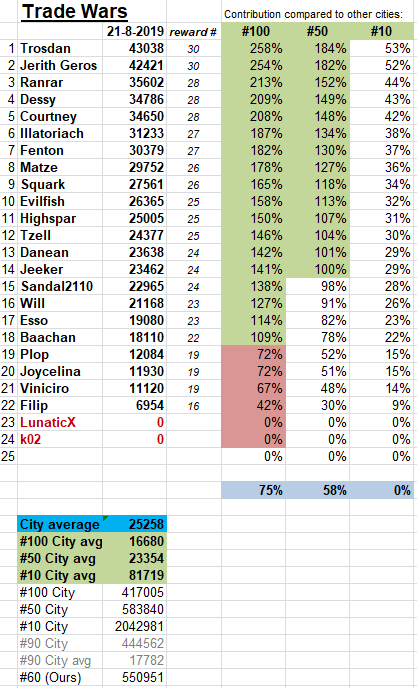