4 city raids this month, with events planned for every week as usual. Raid #1 and #4 will both be bigger raffles (lottery) with some nice legendary/mythical skill items. The 2 weeks in between will be epic items, most likely one random week and one Top X + random.

For anyone that feels like going a bit crazy this month… there will be an extra prize draw at the end of the month again =)
The extra prize(s) will be randommed between everyone  that sets a new personal top score this month (also known as personal best).
Out of the 4 raids, this would be the easiest to achieve on one of the last 2 as the special heroes will bring back triple loot on those.

…And 1 extra winner will be drawn for every 5 players that manage to improve their top score.
Same prize choice, with exception of the item(s) the winner(s) before you picked.


To qualify for this extra draw, the personal top score you'd have to improve: 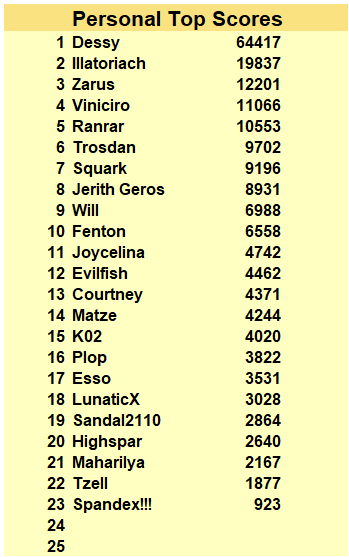 the RNG has selected 2 winners: Grats to Maharilya & Matze!
Maharilya gets to choose first (see prizepool in the first post).
and Matze can choose after that between the remaining items.